What an EPIC line up as the ones and only – 30 Seconds To Mars, Walk The Moon & K. Flay hits the The Forum on the Thursday 19th July 2018! This date is part of The Monolith Tour to showcase a BRAND NEW studio album! But it doesn't stop there, also on the bill is the pop favorites, Walk The Moon and indie pop group MisterWives… And K. Flay! What a way to celebrate the summer with three big names in music! Head to the 'buy now' page and book yours today before it's too late – you won't regret it! 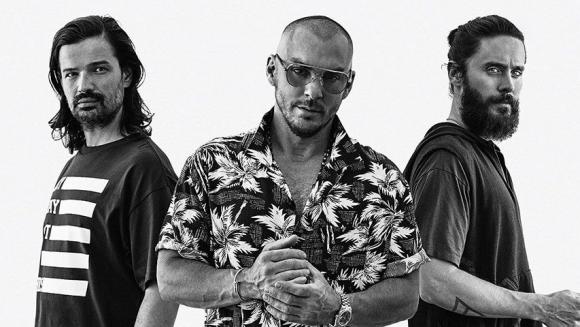 As these guys took the limelight with their groundbreaking first record, it was clear from the get go that 30 Seconds To Mars were going to be huge! Arriving onto the current alternative rock scene, they produced and released their self titled album and 30 Seconds To Mar was officially ready to showcase to the world… the members of course are; Jared Leto on vocals and guitar, his brother Shannon Leto on drums, and Tomo Miličević on bass, gained critical attention which quickly grew to worldwide renown with their second album, “A Beautiful Lie.”

It's hard to believe that it's now five years since and with plenty of dates as part of their Monolith Tour – these guys are back, bigger and better than ever! Set to be released in Spring 2018, you can be one of the first to hear it live in concert.

Fans can expect performances of all their favourite songs, including "The Kill,” “Up in the Air,” and “City Of Angels,” alongside plenty material from the as-yet-unnamed release. The excitement is never ending and nothing can prepare you for this incredible night, just select your tickets and wait for the big night!

Don’t delay – grab your tickets to catch this fantastic set of alternative rock acts live NOW while they last!!