It's that time of year again where Rock fans get to celebrate the Christmas season with a totally alternative line-up! This year at Almost Acoustic Christmas, is bigger than ever with the smash hit acts; Green Day, Beck & Weezer! This incredible line-up will take place at The Forum on Sunday 11th December 2016! Get ready for unforgettable night of your life… tickets on sale NOW! 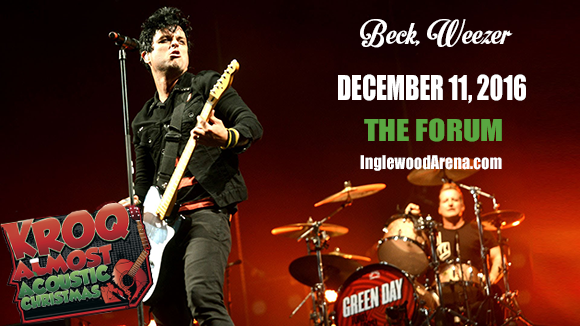 American punk act Green Day hit the mainstream with their 1994 album Dookie which included "Long View" "Basket case" and "When I Come Around." The record broke them through from their underground status as a live local band to worldwide recognition, that same year the band were nominated for nine MTV Video Music Awards including Video of the Year!

Now 22 years later, Green Day has sold more than 75 million records worldwide. The group has won five Grammy Awards: Best Alternative Album for Dookie, Best Rock Album for American Idiot, Record of the Year for "Boulevard of Broken Dreams." Their fan base has spanned over the entirety of their success and so the dedication to seeing their live shows is still very much going strong. Get ready as they bring their brand new 2016 release, "Revolution Radio."