If you've been wondering when the Arctic Monkeys are making their big comeback, some great news is crashing your way! The Arctic Monkeys has put an end to their five-year hiatus as they rev up their engines for the release of their seventh studio album "The Car". In support of the new record, the band is taking the car for a spin across the country on a North American tour with a pitstop at The Kia Forum on Saturday, 30th of September 2023. Dropping two new songs "There'd Better Be a Mirrorball" and "Body Paint" off the new record, don't miss out on the full album itself and its live run by booking your tickets now! 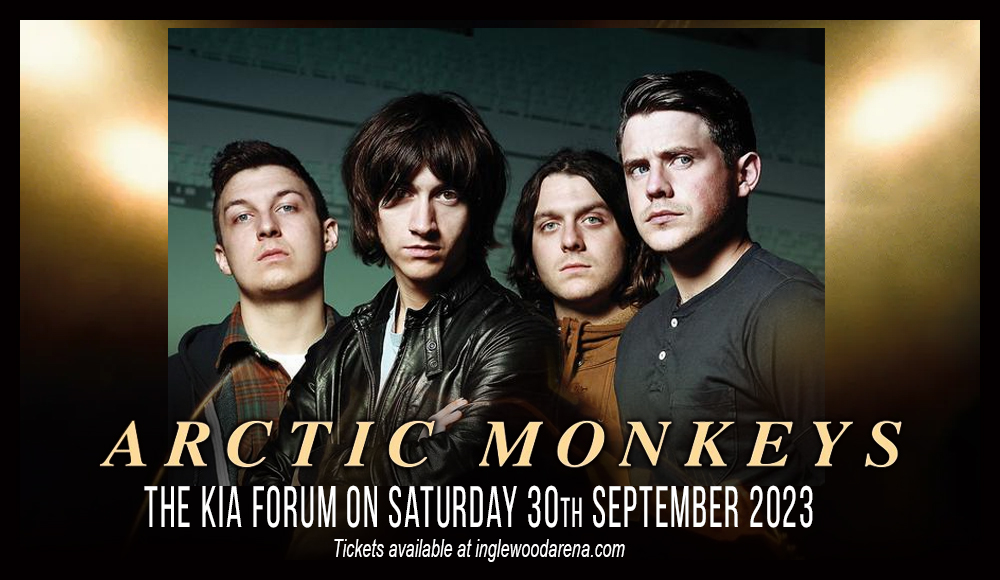 Transforming the indie rock scene in England with the release of their 2005 singles "I Bet You Look Good on the Dancefloor" and "When the Sun Goes Down", the Arctic Monkeys made a mark as the quickest-selling debut in British Music history at the time. From then on, the band soared high as one of the most influential English rock bands of this generation.

After a five-year hiatus since their 2018 record "Tranquility Base Hotel & Casino", the Arctic Monkeys is back, set to crash airwaves around the globe with their big comeback record "The Car". As a dominating player in the global rock scene, its band members Alex Turner, Jamie Cook, Matt Helders, and Nick O'Malley, all together rev up Arctic Monkey's signature resounding energy.

Gaining global acclaim for their faith studio record "AM", the band rocked the industry with their hit singles "Do I Wanna Know?" and "Why'd You Only Call Me When You're High?".

The band is the first independent-label band to debut at the top of the charts in the UK with their first five records. They've won seven Brit Awards, a Mercury Prize, 20 NME Awards, and five Grammy Awards nominations. Their albums "Whatever People Say I Am, That's What I'm Not" and "AM" have been featured in different editions of 500 Greatest Albums of All Time lists by Rolling Stone.

They're "the band that your friends whose music taste can otherwise be described as “Match of the Day-wave” are desperate to see perform live; the band dads and little brothers have in common—simply because throughout their career, they have remained consistent, while their peers in both sound and age have failed to keep similar longevity." according to Vice.

Receiving widespread acclaim and praise from critics and listeners worldwide, the Arctic Monkeys could be one of the UK's biggest and most influential bands in this age. With a new record up their sleeves, the Arctic Monkeys has a lot more to prove for years to come.

As they start revving up their engines for the release of their new album and take The Car for a long ride on tour around the globe, don't miss out on Arctic Monkeys live on stage at The Kia Forum on September 30, 2023 by booking your tickets now!