Puerto Rican trap sensation Bad Bunny comes to The Forum on Sunday 17th November 2019 on his X100pre Tour, in support of his smash hit album of the same name! One of the hottest Latin artists out there, the Cardi B collaborator is looking forward to giving fans a flavor of the summer with his new headlining show:

“I’m thrilled to have Corona join me on my X100PRE Tour to give my fans a taste of Corona Estéreo Beach and showcase their support of Latin music. It's not solely about the music – it’s about the culture, creativity, and contributing to the movement that connects us all together,” the artist said. 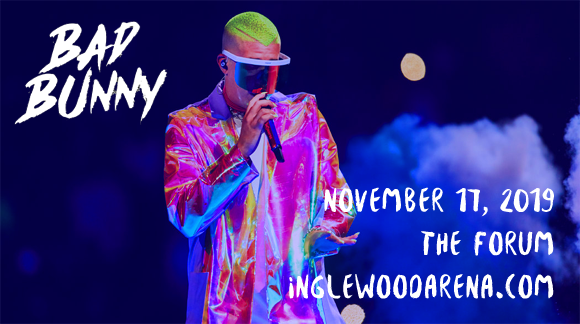 Latin-trap singer Bad Bunny began his career in 2016 as an independent artist, whose SoundCloud "Diles" caught the attention of DJ Luian, leading him to sign with Luian's label Hear This Music. His 2017 single "Soy Peor", reached number 22 on the Billboard Hot Latin Songs chart and served as his breakthrough hit. That summer, he featured on Becky G's single "Mayores", and later that year he collaborated with J Balvin and Prince Royce on the single "Sensualidad," which reached number eight on the Hot Latin Songs chart. A remix of another collaboration, "Te Boté" with Ozuna and Nicky Jam, reached number one on that chart in December 2017. Bad Bunny had his first number one single on the Billboard Hot 100 the following year when he appeared on Cardi B's single "I Like It" with previous collaborator J Balvin. He continued his high-profile collaborations throughout 2018 with the release of "Mia" with Drake and "Te Guste" with Jennifer Lopez. Bad Bunny's debut studio album, X 100pre, was released on Christmas Eve 2018, featuring guest appearances from Diplo, El Alfa and Drake, and reached number one on the Top Latin Albums chart and number 11 on the Billboard 200. As a Latin album, it was awarded Diamond status by the RIAA, selling over 600,000 copies.