If you've been looking for the perfect way to wrap up 2022, you'll definitely be happier than ever as Billie Eilish announces back-to-back encore shows at The Kia Forum as the finale of her huge 2022 world tour in support of her sophomore album "Happier Than Ever". Catch The Hometown Encore relive Billie Eilish's biggest hits and precious gems live on stage at The Kia Forum on Thursday, 15th of December, bringing you a happier-than-ever finale for 2022. The multi-Grammy Award-winning artist is set to throw the year's biggest finale as she kickstarts a new and exciting era for the new year. Don't miss out on this chance to catch the one and only Billie Eilish live on stage 'when the party's over as she wraps up Happier Than Ever at The Hometown Encore by booking your tickets now! 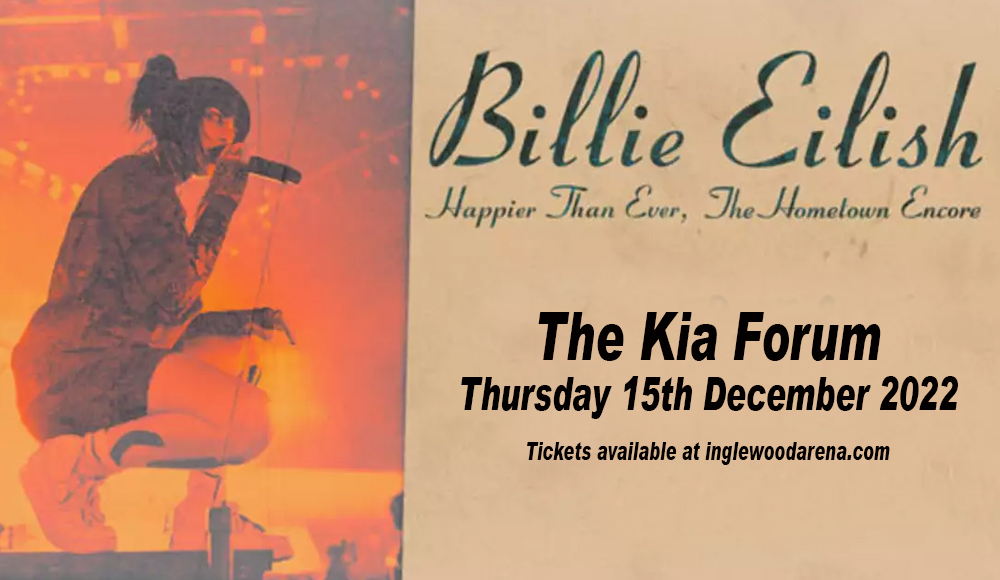 Following a blockbuster run of her Happier Than Ever, The World Tour , the Grammy Award-winning singer is throwing a blast with back-to-back shows at The Kia Forum entitled 'The Hometown Encore" as she wraps up 2022. Her sophomore album, Happier Than Ever, debuted at #1 on the Billboard 200 in the US and several other countries globally. The record exudes her signature emotionally-vulnerable tracks matched with her soft-spoken vocals, with a massive surprise as she turns things up in Happier Than Ever.

Billie Eilish made history as the youngest artist to ever win all four general field categories of Best New Artist, Record of the Year, Song of the Year, and Album of the Year in the same year at the Grammy Awards.

As a woman whose songs could cause tears to flow non-stop among fans around the world, it all began when she dropped "Ocean Eyes" with the help of her brother, Finneas. Giving the song to Billie for a dance class, and uploading the track to SoundCloud, the track amassed hundreds of thousands of listens within two weeks. From then on, the world began to discover a new gem as she caused tears that could add up to oceans for her unique and distinct vocal delivery and lyrical tales.

Following her critically-acclaimed EP "Don't Smile at Me" which featured her hit singles "Ocean Eyes", "Bellyache", "Idontwannabeyouanymore", and "Copycat", she released her debut album "When We All Fall Asleep, Where Do We Go?" in March of 2019. The record hit #1 on the Billboard 200, bagging a 4x Platinum certification from the RIAA. It featured her hit songs and crowd-favorites "When the Party's Over", "Bury a Friend", and "Bad Guy".

In 2021, she dropped her second full-length album "Happier Than Ever" featuring her singles "My Future", "Therefore I Am", "Your Power", "Lost Cause", "NDA", and the album's beloved title track. Just as hard as she screamed and belted high notes to the crowd-favorite title track, the album soared to the top of the charts globally.

A year after the release of her blockbuster sophomore record, she dropped a surprise EP named "Guitar Songs" which includes her singles "TV" and "The 30th". She shared that she was planning to place both tracks on her upcoming third album but felt that "these songs are really current for me, and they’re songs that I want to have said right now." as she wanted to spread its messages to the world as soon as possible.

With 2022 coming to a close, Billie Eilish is celebrating the wrap of her Happier Than Ever, The World Tour with The Hometown Encore at The Kia Forum. Don't miss out on these magical encore nights as she gears up for a bigger year ahead by booking your tickets now!