Pop punk stalwarts Blink 182 are heading out this summer on a co-headlining tour with Louisiana rapper Lil Wayne, and they're bringing their high-energy show to The Forum on Thursday 8th August 2019! The two acts recently celebrated their tour announcement by dropping an incredible mash-up of “What’s My Age Again?” and “A Milli”, and if that's anything to go by, this tour will be dope! Joining them in support are Welsh pop punks Neck Deep! 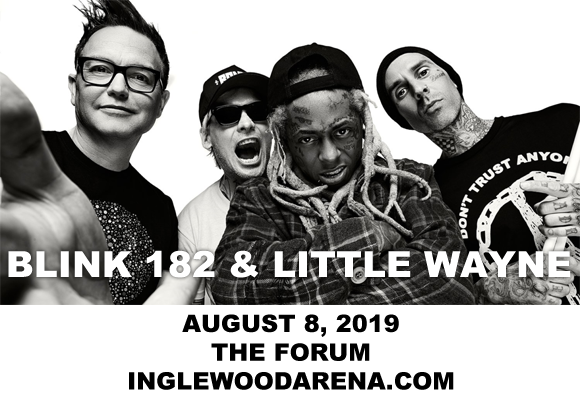 Formed in Poway, California in 1992, Blink-182 is an American punk rock band, currently consisting of bassist and vocalist Mark Hoppus, drummer Travis Barker, and guitarist and vocalist Matt Skiba. The band was formed by Hoppus, guitarist and vocalist Tom DeLonge (who performed with the band until his departure in 2015) and drummer Scott Raynor, who was replaced by Barker in 1998. A key player in the emergence of pop punk in the 1990s, Blink-182 have been known throughout their career for their lively shows and humorous lyrics, and are noted as a highly influential band in terms of pop punk. On the strength of the group's 1995 debut album Cheshire Cat, they were signed to MCA Records in 1996 after a bidding war with several other labels. In 1999, they released their third studio album (and second with MCA), Enema of the State. The album was a huge international success, launching three hit singles – "What's My Age Again?", "All the Small Things", and "Adam's Song" – which received heavy airplay and rotation on MTV. Their next album, Take Off Your Pants and Jacket (2001) was similarly successful, leading Blink-182 to become the biggest pop punk act of the era. After releasing an eponymous album in 2003, the group embarked upon an indefinite hiatus before reforming in 2009. They released their sixth studio album, Neighborhoods, in 2011. After the departure of DeLonge in 2015,  Alkaline Trio guitarist and vocalist Matt Skiba joined the band. Blink-182 released its most recent album, California, in 2016.