The legendary Bon Jovi are on tour for the first time in four years, and they'll be tearing up the stage at The Forum on Wednesday 8th March 2017! The "Livin' on a Prayer" rockers have dubbed the stint the This House Is Not For Sale Tour, and will be promoting their new album of the same name, as well as performing the anthemic hits that made them famous! Don't miss your chance to see this iconic band live! 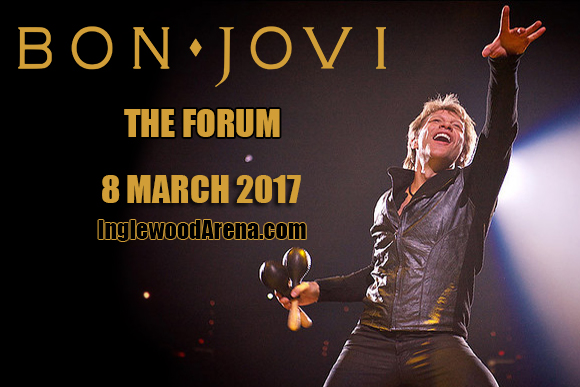 Formed in Sayreville, New Jersey, in 1983, American rock band Bon Jovi were launched into stardom with their third studio album, 1986's Slippery When Wet. Continuing their successful streak, the band's fourth studio album, New Jersey, also held its place at the top of the charts. Bon Jovi's longtime guitarist and co-songwriter Richie Sambora left the band in 2013, and currently, the lineup consists of lead singer and namesake Jon Bon Jovi (born John Francis Bongiovi, Jr.), pianist and keyboardist David Bryan, drummer Tico Torres, lead guitarist Phil X, and bassist Hugh McDonald. To date, Bon Jovi has released 13 studio albums, plus two compilations and two live albums. Bon Jovi was inducted into the UK Music Hall of Fame in 2006, and the band received the Award of Merit at the American Music Awards in 2004. Jon Bon Jovi and Richie Sambora were inducted into Songwriters Hall of Fame in 2009.