Cali Christmas is back to ring in the holidays with some phat beats and dope rhymes, and this year the line-up is bigger than ever! Headlining the show is Grammy Award-winning hiphop superstar Chance the Rapper, and he'll be joined by Joey Bada$$, Travis Scott, Majid Jordan & G4SHI for the show of the year! Coming to The Forum on Saturday 16th December 2017! 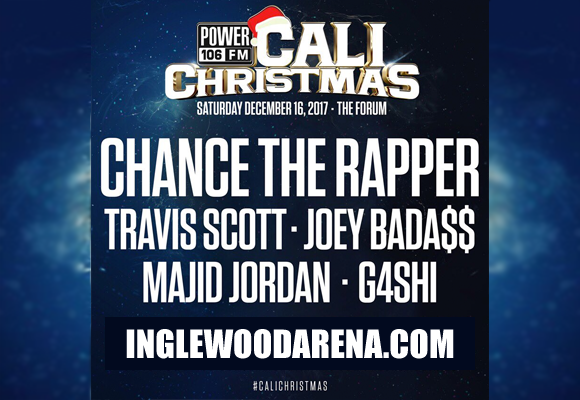 Breakthrough artist Chance the Rapper first gained mainstream popularity in 2013 with the release of his second mixtape Acid Rap. He recorded his first mixtape, 10 Day, during a ten day suspension from high school. The mixtape became popular, leading to hiphop and RnB artist Childish Gambino featuring him on the track “They Don't Like Me” from his mixtape Royalty (2012). Chance's third mixtape, Coloring Book, was released in 2016 and earned the rapper three Grammy Awards, including Best Rap Album. The mixtape was streamed over 57.3 million times in its first week of release, becoming the first streaming-only album to ever receive and win a Grammy nomination.