The Latin fever is on! Turning up the heat in this side of town are Latino pop and rock legends Camila & Sin Bandera. They're painting this side of town red as they join forces for a tour dubbed as the "4 Latidos tour". This is definitely a red hot date you shouldn't dare miss. They'll be hitting The Forum stage on Friday 12th April 2019, so make sure to mark your calendars. Whether you've been a long-time fan or just new to the fold, Camila & Sin Bandera are loaded with entertainment pizzazz when it comes to rendering their biggest hits on the live stage. A back-to-back showcase such as this is few and far between, so don't miss this chance of booking your ticket to not one, but two hot Latin superstars in one stage. Definitely a bang for your buck! 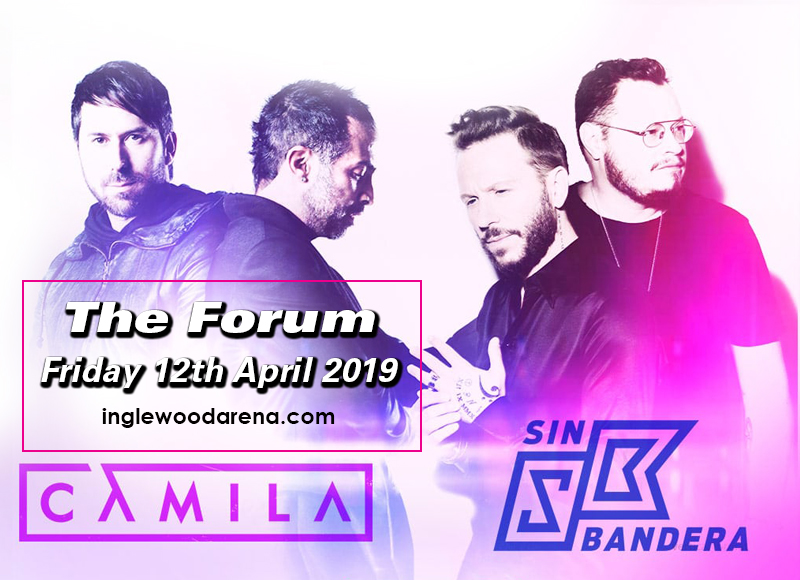 Multi-awarded singer, songwriter, and producer Mario Domm founded Camila in 2005, inviting his friends Pablo Hurtado and Samuel "Samo" Parra to complete the line-up. Their 2006 debut album "Todo Cambió", spawned the mega Billboard Latin Chart topper "Abrazame". It also includes follow-up hit singles such as "Coleccionista de Canciones," "Sin Tu Amor" and "Yo Quiero." From there, the red carpet of success continued to roll out for their career as they bagged a Latin Grammy Award nomination for Song of the Year 2007 and won awards at the Premios Lo Nuestro 2008 for Best Song Award and Group or Duo of the Year Award; including best group/duo in the Latin Billboard Music Awards. Their sophomore album "Dejarte de Amar" released in 2010 hit the two million album mark worldwide and reaped Diamond and Platinum certifications. That same year, they collected three Latin Grammy Awards, including Record of the Year and Album of the Year.

Sin Bandera is composed of Leonel García, and Noel Schajris who got together in 2000, with the aim of bringing music that is deeply rooted on Latin love songs. In 2002, their eponymous debut album churned out the smash hit "Entra En Mi Vida", which was also used as a theme song for a telenovela.

The "4 Latidos tour" is definitely a Latin music tour de force like no other. Camila & Sin Bandera have joined forces to deliver onstage the heat, passion, soul, and energy that distinctly defines Latino pop and rock music.

“We’ve been friends for 20 years,” said Camila lead singer Mario Domm. “We’ve written and produced together. We share label and management. We’re family but we’d never had the opportunity to share the stage.”

And with that said, you're looking at a hot-ticket that has been tagged as a 'must-see'. Get on the move and get your tickets now!