Treat your mom to a gift she'll never forget this Mother's Day with An Evening of Soul, featuring Charlie Wilson & Patti Labelle! These two legendary singers, known for hits like "I'm Blessed" and "If Only You Knew", will be performing a full headlining set each at The Forum on Sunday 12th May 2019, with support from Grammy Award-winner Stephanie Mills! 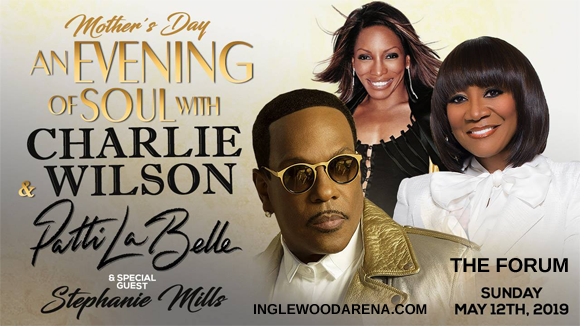 American musician, singer, songwriter, producer Charlie Wilson rose to fame singing with R&B and funk group The Gap Band in the 1970s and '80s, who had multiple hits including “Outstanding”, "Party Train", "Yearning for Your Love", "Burn Rubber on Me", “You Dropped a Bomb on Me”, and “Oops Upside Your Head”. Several of the group's songs are among the most sampled songs in music history. Wilson is also a successful solo artist, who has been nominated for thirteen Grammy awards and ten NAACP Image Awards (including two wins). He received a 2009 Soul Train Icon Award, and was a recipient of a BMI Icon Award in 2005, and in 2009, he was named Billboard magazine's No. 1 Adult R&B Artist, and his song "There Goes My Baby" was named the No. 1 Urban Adult Song for 2009 in Billboard Magazine. Wilson was given the BET Lifetime Achievement Award in 2009 and the TV tribute show in his honor helped BET achieve the highest ratings in years for the program, topping all its broadcast and cable competition for the night in both demographics and total viewers. His most recent solo album, In It To Win It, was released in 2017 and featured collaborations with Snoop Dogg, Lalah Hathaway, Wiz Khalifa, T.I., Robin Thicke and Pitbull.