Are you ready for one of the BIGGEST events in R&B this year??? We’ve got a COLOSSAL lineup coming for you at The Forum on Tuesday 23rd May 2017 – get ready to see none other than Chris Brown, 50 Cent, OT Genasis and Fabolous all in one day, on the same stage, on The Party tour!! Yes it’s true – we can hardly believe it either! Don’t wait about to buy tickets, because they’re probably selling out as you read this – hit the “Buy Tickets,” button above to be certain of your place at what promises to be a truly phenomenal show!! 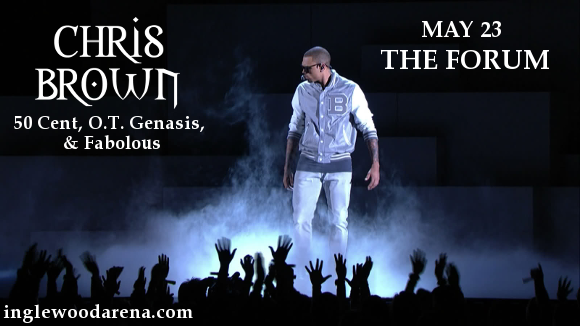 The star-studded tour will kick off with Fabolous. Starting off rapping in high school, he was signed at an early age bt DJ Clue to his record label Desert Storm, eventually leading to a huge deal with Atlantic Records! His first album, “Ghetto Fabolous” which saw a bunch of hits including “Can’t Deny it” and “Young’n (Holla Back)”. Also in support is rapper OT Genasis. With three new singles released since his last album, he’s best known for his single “CoCo,” which hit 20th place on the Billboard Hot 100!!

Headlining are the heavy hitters, who need no introduction! 50 Cent promises the gansta rap you all know him so well for, while Chris Brown will wow you all with his incredible combination of live vocals, fantastic dance skills and of course, one smash hit after another!!

"When's the last time you’ve been to a show/concert and have actually been entertained???" Chris Brown asked in a tweet. "WE COMING!!!!”

Will you be there?? Get your tickets to see Chris Brown, 50 Cent, OT Genasis and Fabolous TODAY!!