MASSIVE news, nu metal fans! Disturbed have announced a HUGE North American tour in support of their latest album “Evolution,” with opening act Three Days Grace, and further support yet to be announced! They’re on their way to The Forum on Friday 11th January 2019 – don’t miss it!! Grab your tickets now and get ready for the hard rock show of the year! 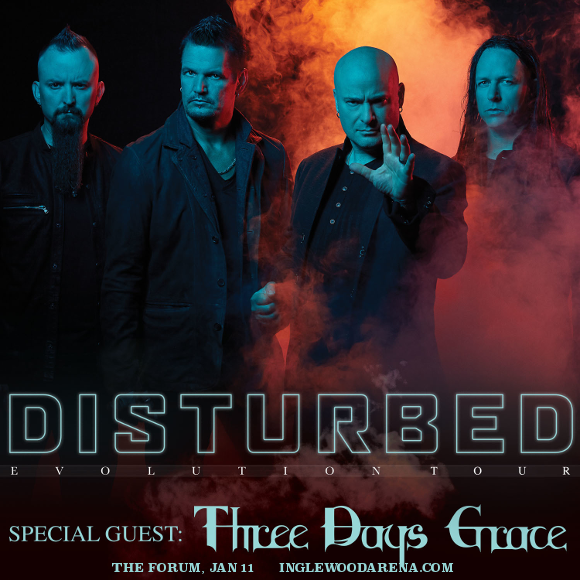 After the resounding success of their unexpected cover of the Simon and Garfunkel acoustic classic “The Sound Of Silence,” which hit No.1 on the rock charts in multiple countries, Disturbed were inspired to test the waters with the inclusion of softer, acoustic music on their new album for 2018, breaking out of their exclusively heavy-metal box. ”We showed that we could do something different and be successful at it," frontman David Draiman stated in an interview. "If we could do that and achieve that, what limitations are there anymore? The answer in our minds was no. So we just literally went wherever our creative juices were going and flowing on any given day, with the specific intention of starting with the more laid back stuff out of the gate.”

There’s something for every fan to love on evolution – from soft but rousting, intense songs like “A Reason To Fight,” to the solid heavy metal earworms like “The Best Ones Lie,” that the band are so well-known for.

What are you waiting for?? Those tickets won’t wait – grab your opportunity to see Disturbed NOW while it lasts!!