The mighty Five Finger Death Punch will be embarking on a mammoth arena tour for 2020, in support of their new album F8, which follows 2018's And Justice For None! Having not long wrapped up from being on the road with Three Days Grace, Megadeth and Bad Wolves, they'll be headed to The Forum on Tuesday 21st April 2020 with Papa Roach, I Prevail and Ice Nine Kills in tow, making a must-see line up for any rock and metal fan! Get ready for the heavy as these hard-hitters take to the stage! 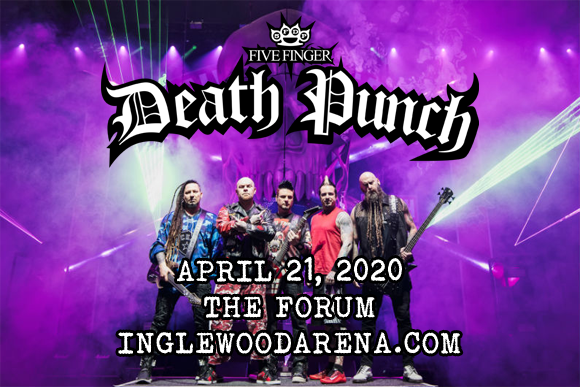 Formed in Las Vegas, Nevada in 2005, Five Finger Death Punch was originally comprised of previous members of the hard rock and heavy metal bands U.P.O. and W.A.S.P., and currently consists of founding members Ivan Moody (vocals) and Zoltan Bathory (guitar), as well as Jason Hook (guitar), Chris Kaell (bass) and Charlie Engen (drums). 2007 brought the band's debut album, The Way of the Fist, which sold over 500,000 copies in the United States. Their 2009 follow-up, War is the Answer, was the first of three consecutive platinum-selling albums for the band, with American Capitalist (2011) and The Wrong Side of Heaven and the Righteous Side of Hell, Volume 1 (2013) coming after. To date, the band has released seven studio albums, with three of them gaining gold certification. Their eighth and most recent album, F8, is released in 2020.