Legendary duo Hall and Oates & Grammy Award-winners Train will be touring together this summer, coming to The Forum on Tuesday 31st July 2018 to perform two full headlining sets of wall-to-wall pop hits like "Maneater" and "Hey, Soul Sister"!

“Looking forward to an amazing tour with our buddies from Train and seeing all our fans around the country in 2018," Oates said of the tour. 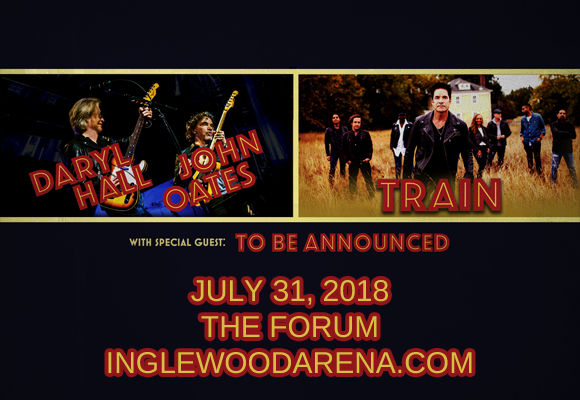 Pop rock music duo Daryl Hall and John Oates have sold roughly forty million records since they formed in the 1970s, making them the third best-selling music duo of all time. With a plethora of number one singles on the Billboard Hot 100 including "Kiss on My List", "Private Eyes", "I Can't Go for That (No Can Do)", "Maneater", and "Out of Touch", they have also charted thirty four hits on the US Billboard Hot 100 altogether, with seven RIAA platinum albums, and six RIAA gold albums to date. Hall and Oates were inducted into the Songwriters Hall of Fame in 2003 and in 2016 received a star on the Hollywood Walk of Fame.