EVENT POSTPONED (date TBA). Hold on to your tickets! They will be valid for the new date once announced.

One of the world's hottest male superstars, Justin Bieber, is back on tour! Making his way to The Kia Forum on Sunday, July 3rd, 2022, Justin Bieber is set to bring big surprises aboard the Justice World Tour. The singer behind multi-platinum tracks since 2009 is set to bring his 2021 chart-topping album "Justice" to stages around the world. From singing 'baby, baby, baby, oh, he's got the world hooked to his biggest hits over the next years like "Sorry", "What Do You Mean", and "As Long as You Love Me". His 2021 record "Justice" produced new chart-topping hits "Peaches", "Ghost", and "Anyone". Beliebers can expect the man's biggest hits and new tracks off of "Justice" come to life at the Justice World Tour. Book your tickets now! 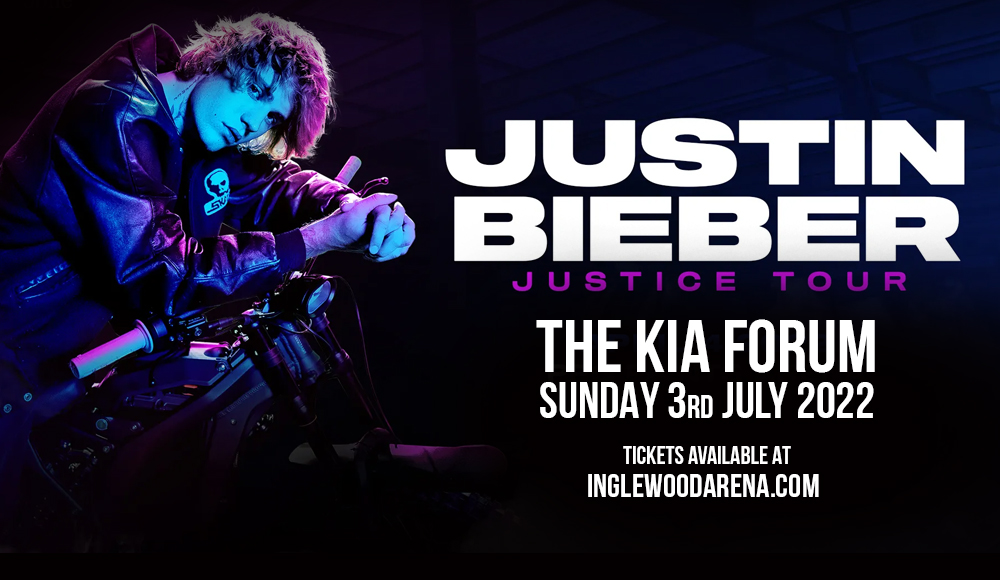 Breaking the all-time record for having the most monthly listeners in Spotify's history, Justin Bieber reached a peak of 94.68 million listeners on the music streaming platform. "Ghost" from his 2021 album "Justice" marked his 20th top-five hit on the Hot 100. Kicking off the Justice World Tour following the release of his sixth US #1 studio album "Justice", Bieber has become one of the world's greatest artists of all time, with several various recognitions from Billboard, Forbes, Time magazine, and so on.

Born as Justin Drew Bieber in 1994, hailing from Ontario, Bieber was discovered through a 2007 YouTube video. Signing with Usher, Bieber eventually released his debut single "One Time" in 2008, peaking at #17 on the Billboard Hot 100. He dropped his next singles "One Less Lonely Girl", "Love Me", and "Favorite Girl", all of which charting in the Top 40 of the Hot 100, becoming the first solo artist to have 4 singles make an appearance in the top 40 before officially releasing their debut album.

From then on, Justin Bieber became a global sensation. In 2010, he released his debut album, My World 2.0's first single, "Baby" which rocked the world hitting #5 on the Hot 100. His debut album hit #1 on the US Billboard 200, becoming the youngest solo male artists to do so since Stevie Wonder.

Justin Bieber then became the global popstar loved by millions of fans across the globe we know today. Since the last decade, he amassed a slew of international RIAA multi-platinum hits including "Boyfriend", "As Long as You Love Me" featuring Big Sean, "What Do You Mean?", "Love Yourself", "Yummy", "Intentions" featuring Quavo, "Anyone", and "Peaches". He also bagged RIAA certified Diamond hits namely "Baby", and "Sorry".

In 2021, he released his sixth studio album "Justice" hitting #1 on the Billboard 200, also marking his eighth album to hit #1 on the charts. The album features singles "Anyone", "Hold On", "Peaches" featuring Daniel Caesar and Giveon, and "Ghost".

“My objective in making this album was to provide comfort to the listener… I know a lot of people have been isolated, but music is really an outlet to bring people together,” Bieber told Vogue in an interview before the release of "Justice".

“We’re working hard to make this tour the best one yet,” Bieber said. As the man kickstarts his much-awaited Justice World Tour, he says “I’m excited to get out there and engage with my fans again.”

Don't miss out on Bieber's biggest hits, new tracks from Justice, and big surprises come to life at the Justice World Tour at The Kia Forum this July 3rd by booking your tickets now!