It’s been confirmed – Kendrick Lamar is back and on tour!! With special support from SZA and Schoolboy Q, the rap star is on his way to The Forum on Thursday 10th May 2018 with his hot new album, “Damn”! Tickets will fly so don’t delay – grab yours FAST while tickets last!! 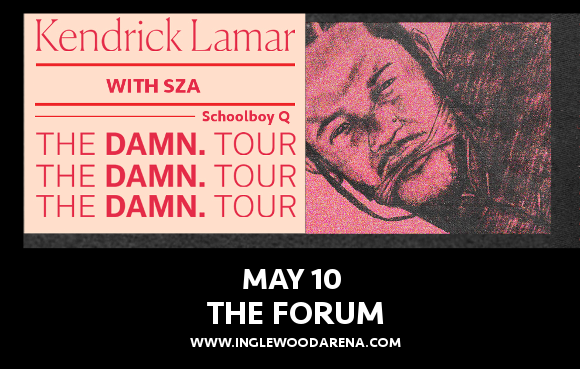 “Damn,” is the new record from Kendrick Lamar, the successor to 2015’s “To Pimp a Butterfly”. Featuring spoken word as well as rap, in addition to funk and soul influences, the record was received to widespread critical acclaim and won the Grammy Award for Best Rap Album. “Damn,” has so far followed closely to Kendrick Lamar’s previous standard of excellence.

"I like to put a lot of different things and wordplays and messages in my music because I want it to live further than two weeks," he said, when asked about his songwriting process. "I always felt like God used me as a vessel, whether to share my flaws, my intellect, my pain… always been a vessel. I can say the nastiest thing on record but I still feel like that's a vessel. You need to hear it. I can't sugarcoat the reality.”

Get ready to see Kendrick Lamar’s unique gritty performance live – have you got your tickets yet???