The world famous indie rockers – Kings of Leon are BACK!

Returning to the stage to not only to perform all of your favorite anthems, but to also bring to the stage their brand new record, 'WALLS'! Walls is their first number 1 album on the US charts and it's no wonder why, it's a hit all round! Get ready to catch their EPIC live show like never heard before at The Forum on Saturday 28th January 2017 – tickets are on sale NOW! 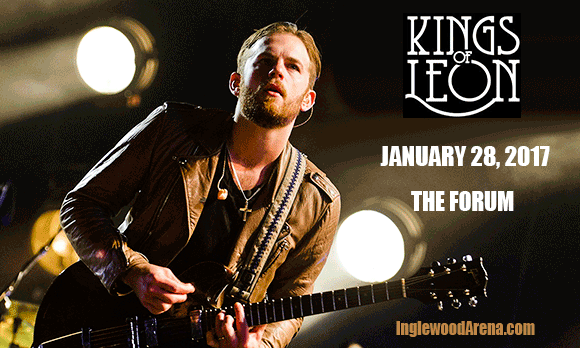 Kings of Leon are one of the biggest names in American rock music to hit the mainstream in the early 2000's. Their raw and passionate fusion of classic Nashville sound mixed with fresh and eclectic indie was an instant hit from the start of their career. Formed by brothers Caleb Followill and Nathan Followill and Jared Followill, along with their cousin Matthew Followill – this family affair makes the music that much sincere.

Kings of Leon began with Southern Blues roots and throughout the years they gradually took over the world with chart topping singles such as "Sex On Fire" "Use Somebody" "Notion and many more. To this date they have a total of 7 albums and most recently are doing better than ever before with a number 1 spot at the top of the charts for the incredible record. And a total of 3 Grammy Awards – this band is on FIRE!