MASSIVE news – The Forum is proud to announce the biggest thing to get excited about this festive season! Presenting the day two of the KROQ Almost Acoustic Christmas festival, featuring, Morrissey, The Killers, The Lumineers and more! All these massive acts are coming to Inglewood on Sunday 10th December 2017 – tickets will sell out fast so be speedy! Book your tickets today! 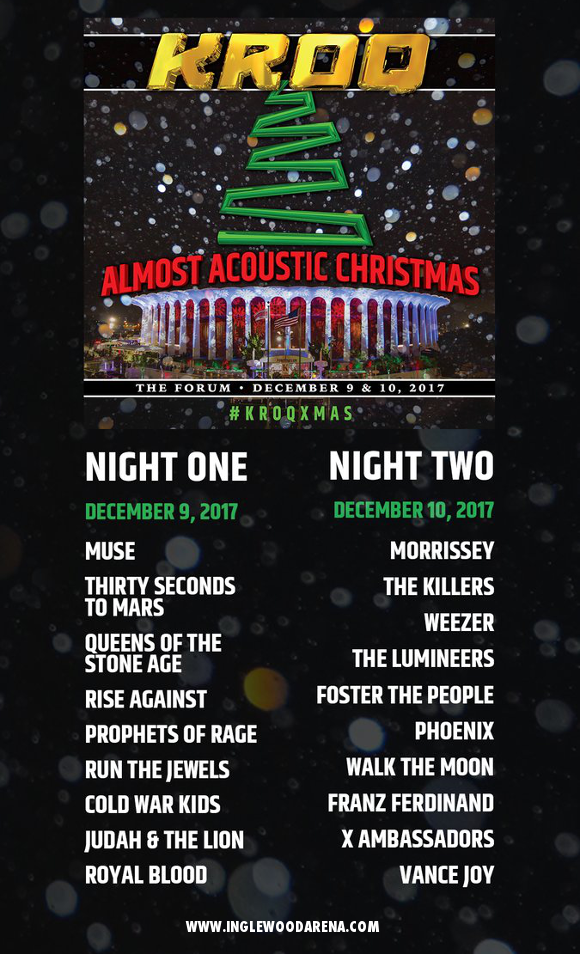 The first KROQ annual festival took place in 1982 as a 1-day event. It has since grown into a two-day event as of 1992, and today is one of the most-hyped festivals in the entire world – and looking at this year’s show, it’s easy to see why! The full line-up for the Sunday concert includes headlining act Morrissey, Franz Ferdinand, Weezer, The Killers, Phoenix, Walk The Moon, Foster The People, Vance Joy, X Ambassadors and The Lumineers.

Fans of Morrisey will be delighted to see him back on top form, delivering songs from his upcoming solo album, “Low In High School,” described as a “landmark record,” by BMG. Due for release November 17th, there’s enough time for you to grab the album and get fully familiar with it in time for the show on December 10th!

If this lineup hasn’t sold you, we don’t know what will. Tickets in high demand and selling fast – get yours NOW and get ready to see Morrisey, 30 Seconds to Mars, The Killers and many more LIVE at The Forum!!