The show goes on! The legendary award-winning Mexican rock act, Mana, is pumping up its shows at their residency at The Forum in LA. Hailed as the most successful Latin-American band in history with their Spanish-sung tracks taking the world by storm, the band is set to mark history at their residency at The Forum, adding nights until fans stop buying tickets. Fans of the legends are in luck with Mana serving an additional night at The Forum on September 16th of 2022. “We have so many surprises in store for our fans at this residency, …no two shows will be the same," said the band. Don't miss out on Mana performing their biggest hits and crowd-favorites including "Como Dueles En Los Labios", "No Ha Parado De Llover", "Mariposa Traicionera", and many more live at The Forum. Book your tickets now! 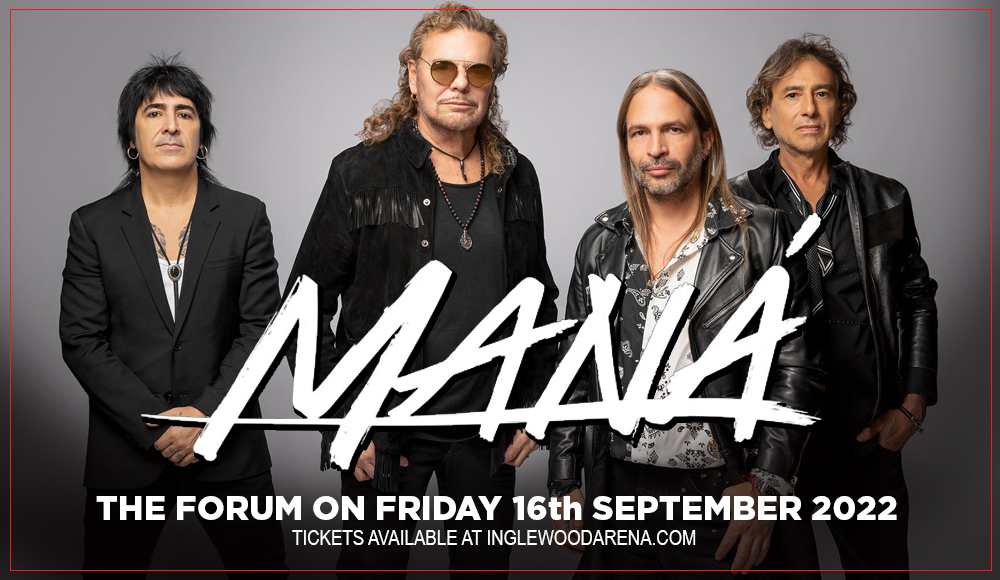 Current members who keep Mana and it shows alive for years to come are Fher Olvera on lead vocals, Alex Gonzales on drums, Juan Calleros on bass, and Sergio Vallin on guitars. Together, they mark history as one of the best-selling Latin artists with over forty-million records sold across the globe.

Rising in 1986, their first record label told them that "rock en español was just a fad", making them change the direction of their sound. Determined as they were, Mana switched to Warner Music and dropped their second record, Falta Amor, featuring "Rayando el Sol", their first hit single.

From a shaky start of fighting for their sound, Mana found commercial success with the release of their third studio album, ¿Dónde Jugarán Los Niños? which is now awarded 12x Platinum in the US, spawning hit singles "Oye Mi Amor", "De Pies a Cabeza", and "Vivir Sin Aire".

From then on, Mana took the world by storm, propelling to become the most successful Latin American band to exist, gaining multiple Grammy Awards, Billboard Latin Music Awards, Latin Grammy Awards, and so much more.

They amassed hits after hit in their succeeding records over the next three decades. Hits that blessed the ears of listeners around the world include "Labios Compartidos", "Mi Verdad", "Manda Una Señal", "El Reloj Cucú", "Mariposa Traicionera", and many more.

As a band that marked history for Latin music, Mana is set to bring non-stop shows at The Forum until fans stop buying tickets. “We aren’t playing anywhere else until people stop buying tickets,” said Fher Olvera in an interview with Billboard. “Los Angeles has been like our second home,” said Olvera. “We call it the house of rock."

Don't miss out on this chance to catch the Latin rock legends perform a series of shows at The Forum. Book your tickets now!