Get ready all fans of Latin Pop!! The Mexican superstar Marco Antonio Solis will be going on tour across the USA with the brother and sister double act, the phenomenal Jesse and Joy!! Performing hit songs from across their careers, the Spanish-speaking stars will arrive in The Forum on Saturday 14th October 2017!! Don’t miss out – get your tickets to see them NOW while they last!! 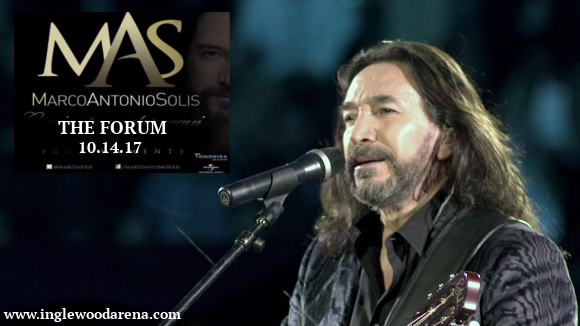 Showing promise from the tender age of six, Marco Antonio Solis performed as part of Los Hermanitos Solís. Later, he found huge success with the band Los Bukis, for which he worked as the main songwriter, guitarist and vocalist, gaining recognition across Mexico and the United States. In1995, he embarked on a solo career after almost 20 years with the band. With more than 30 songs charting on the Billboard's Hot Latin Tracks, several of them reaching number one, he released no less than 10 solo studio albums from 1995 to 2013!!

"If they asked me to give a songwriting class, I'd be a failure," Solís said, regarding the methods behind his inspirational songwriting. "I write from my heart. I can't repress my emotions. I still like to write on paper, because I feel more in touch with the words. You see my scrawls, my corrections—and along the way, I find myself."

Get ready to catch Marco Antonio Solis live with fantastic support from the up-and-coming Jesse and Joy! What are you waiting for?? Book your tickets TODAY!!