Are you ready for OZUNA?? The Puerto Rican rapidly rising star is bringing his Aura tour – his third North American tour of the year! – to the Forum on Wednesday 21st November 2018! Bringing the reggaeton and Latin trap genres to a massive mainstream audience, this artist’s importance can’t be understated. Don’t miss out – get your tickets to see Ozuna today!! 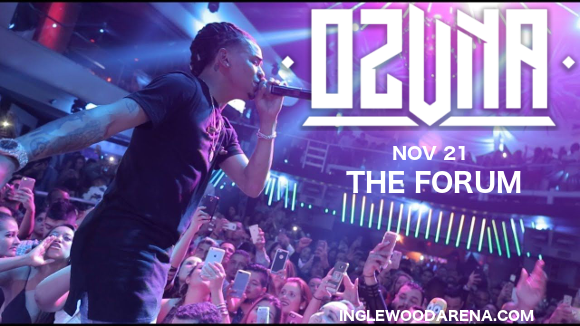 Juan Carlos Ozuna Rosado, best known by his stage name Ozuna, burst onto the popular music scene with his album “Odisea,” which broke the record for a male artist for longest time spent at the top of the Billboard’s Top Latin Albums chart! After the massive success of his debut, all eyes were on Ozuna to see what he’d pull out the bag next.

“It wasn’t about doing something bigger or better,” the singer explained in an interview. “I don’t like to proclaim things. But people ask for a lot of music; it’s different from what it was. I study this genre, and it’s like the university for me. Now, artists grow weekly, there’s new sounds, new rhythms, new technology, new people, and you have to evolve.”

Get ready to experience that evolution live – what are you waiting for?? Grab your Ozuna tickets NOW while they last!!