Post Malone comes to The Forum on Thursday 21st November 2019 for the second night in a row on his gargantuan Runaway Tour! He'll be bustin' out the hits, from "White Iverson" to "Sunflower" and "Wow", and getting the crowd to go crazy as he pulls out all the stops for this hip-hop party! The four-time Grammy-nominated artist is also bringing an epic support line-up, with Rae Sremmurd's Swae Lee and up-and-comer Tyla Yaweh join him for his stint on the road! 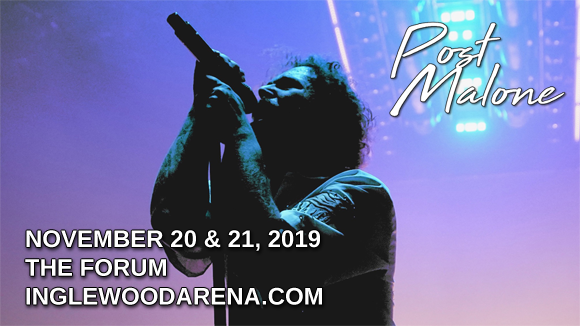 LA-based singer, rapper, songwriter, and record producer Post Malone is one of rap's hottest commodities, with 90 million records sold and a string of top ten hits to his name. He first made waves in the rap scene with his 2015 debut single "White Iverson", which was a top 20 hit on the Billboard Hot 100 and led to a record deal with Republic Records. The single paved the way for Stoney, his 2016 debut album, which peaked at number four on the Billboard 200 and was eventually certified triple-platinum by the RIAA. The album launched several hit singles, including the platinum-selling "Congratulations". In 2018, Post Malone released his second studio album, Beerbongs and Bentleys (2018), which debuted at number one on the Billboard 200, and broke several streaming records upon release. The album also launched the number-one singles "Rockstar" and "Psycho", and was nominated for four awards at the 61st Grammy Awards, including Album of the Year and Record of the Year.