Los Angeles radio station Real 92.3’s annual The Real Show is back, with the amazing J. Cole confirmed to headline this fantastic one-day festival! Also on the lineup are French Montana, Yo Gotti, Cardi B and more!! Catch this all-star concert live at The Forum on Saturday 18th November 2017! It's going to be an unmissable night so be sure to book your tickets in advance and get on down for an evening you won't forget! 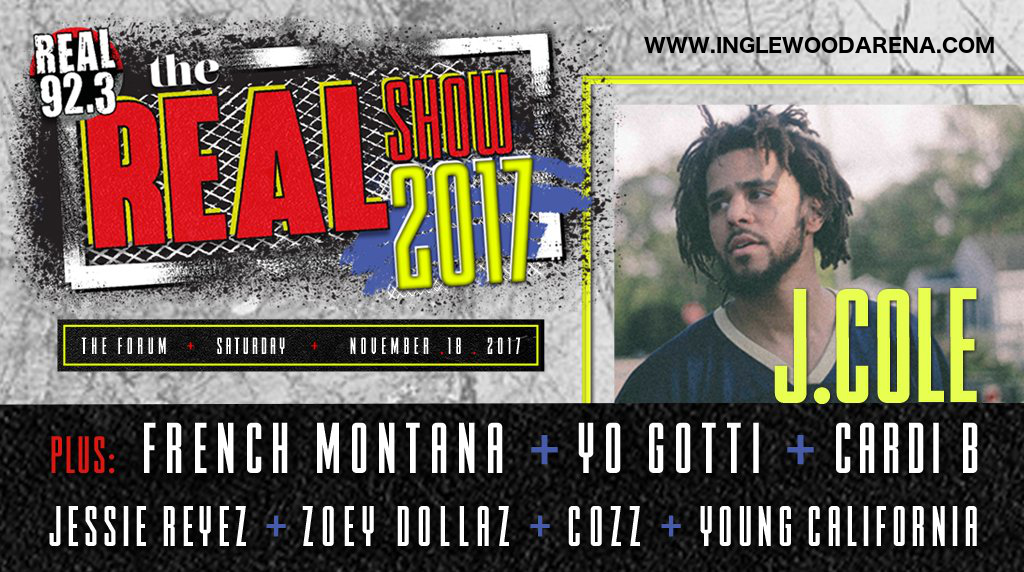 The REAL show is one of the most hotly anticipated events in rap and hip-hop, with none other than Usher, Chris Brown, Chance the Rapper, Wiz Khalifa, Ty Dolla $ign, YG, Desiigner, Bryson Tiller, and Big Sean performing at last year’s The Real Show. This year, hosted by Real 92.3’s own Big Boy, with a lineup including J. Cole, French Montana, Yo Gotti, Cardi B, Jessie Reyez, Zoey Dollaz, and Cozz, with a special DJ performance by Young California, promises to be no less exciting than the last!!

Headliner Jermaine Lamarr Cole is without a doubt one of the hottest rappers and producers in the world right now. Gaining attention with his first mixtape, “The Come Up”, he went on to sign to Jay Z's Roc Nation and release his debut album, the chart-topping, swiftly platinum-certified “Cole World: The Sideline Story”.

Don’t miss your chance to catch the hip-hop star along with French Montanna, Cardi B, Yo Gotti and many more at this amazing event – get your tickets now!!