The name Rihanna rouses as surge of emotions. Her body of musical work is loaded with infectious grooves. Her sense of style is reinvention personified. Hence, announcements such as this of an upcoming concert tour, spurs up rejoicing and revelry among legions of her most loyal fans. Dubbed as the ANTI World Tour, this concert subliminally sends a message that Rihanna is out to defy all expectations. But before you sit back, relax, and eagerly anticipate the exhilarating vibe that this show brings, you’ve got to get through the rush of getting you and your RiRi-loving squad tickets to the show. So hurry, get your tickets now! 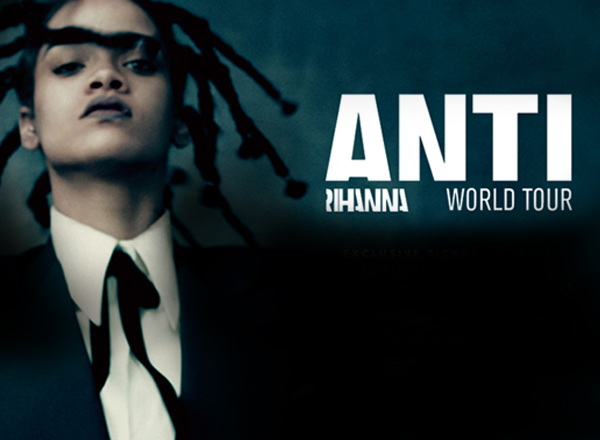 Ever since the release of her 2005 debut album ‘Music of the Sun’ which featured the single ‘Pon de Replay’, Barbadian singer and songwriter Rihanna’s name has been a consistent fixture on radio and record sales charts. Currently her record sales have reached the 200+ million mark, and is still growing by the minute. She is considered one of the best-selling artists of all time, dishing out hit-after-hit-after-hit with monumental singles like "Umbrella", "Take a Bow", "Disturbia", "Only Girl (In the World)", "S&M", "We Found Love", "Diamonds" ,”Stay”, among many others. She achieved the phenomenal feat of being the youngest and fastest solo artist to have thirteen number-one singles on the Billboard Hot 100 chart. She noted for being a style shifter, a fashion icon that dares to be different, a dominating figure that sets trends and runs the tides of pop culture.