It's the end of an era as thrash metal gods Slayer take to the stage at The Forum on Saturday 30th November 2019 for one final time as part of their farewell tour! A transgressive, groundbreaking band that inspired a legion of heavymetallers to pick up their instruments and rock the hell out, Slayer will leave an enduring legacy when they're gone, but for now, they grace fans with one last hurrah, and it's going to be epic! The goliath headliners will be joined for this once-in-a-lifetime show by an equally mammoth support lineup of Primus, Ministry & Philip H. Anselmo! 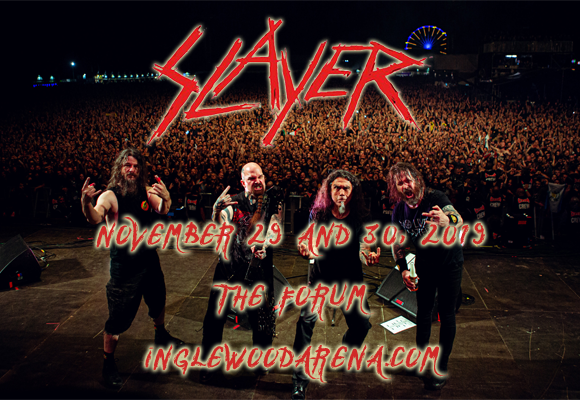 Pioneers of the thrash metal sound, Slayer came to prominence in the 1980s with their aggressive, powerful, often controversial and highly influential take on heavy metal music. Often linked with Metallica, Megadeth and Anthrax, as one of the “big four” founding bands of thrash, Slayer was formed by Kerry King and Jeff Hanneman in 1981, and came to fame with its seminal 1986 album Reign In Blood. Hailed by many as the greatest speed metal album of all time, Reign In Blood was the band's first album to enter the Billboard 200, despite receiving widespread censorship due to its artwork and lyrical content, and is now thought of as a classic. Over the years, due in part to their loyal fan base and the shifting of social attitudes toward heavy metal, Slayer slowly gained critical recognition for their musical ingenuity, receiving five Grammy Award nominations throughout their career. Slayer's current tour marks their last ever outing, after which their 35 year career will come to an end.