You've asked for it…now, you got served with the reunion concert tour you've all been waiting for! The Millennium Tour: B2K, featuring Mario & Pretty Ricky, is finally happening on Saturday 13th April 2019 at The Forum. Hip-hop / RnB boy band B2K, whose cult following at the onset of the new millennium, grew into a massive following that extended over to the millennials and beyond. Since the breakup in 2004, the clamor for a reunion never died down until now…Now, there's a deafening demand for tickets. This is a must-watch concert that took over a decade to come to pass. No time to hesitate. Act quickly, book your tickets now! 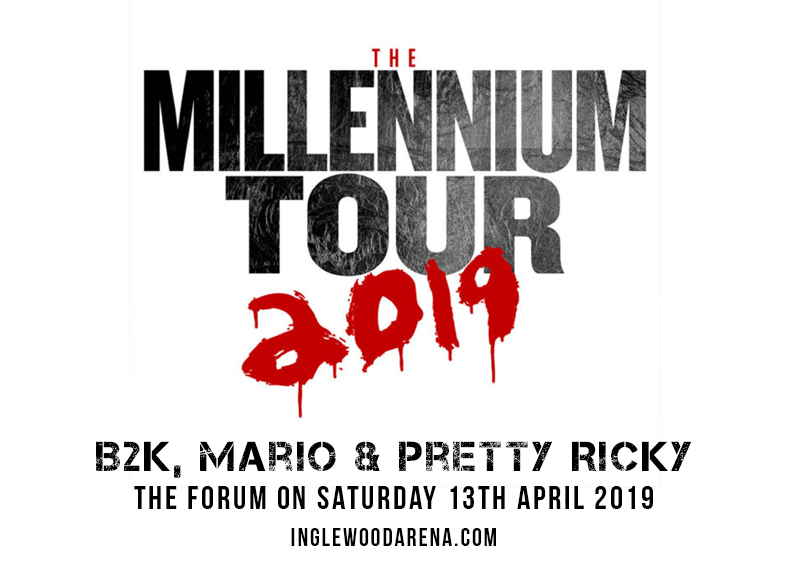 Now it's official! The long-awaited reunion tour of Hip-hop / RnB boy band B2K is finally happening. After 15 long years since their break-up, phones never stopped ringing, so to speak, from fans waiting to hear news or even just clues of a possible reunion tour from the boyz who had a short but impactful stint as members of B2K, and delivered the hits "Bump Bump Bump," "Gots Ta Be" and "Badaboom".

And finally, ex-B2K members and their management answered the call. In a press statement, Michelle La Fleur, Chief Operating Officer of Omarion's entertainment company, confirmed — "We are excited to be a part of what will undeniably be a nostalgic and electrifying performance that will awaken cherished memories and create new, indelible ones for the next generation… While admiring their solo successes, the fans have consistently demanded a B2K reunion and, with the determination of an incredibly talented team, that dream is now a reality."

Formed in 1998, Omarion, Raz B, Boog (formerly J-Boog) and Fizz (formerly Lil' Fizz) were known together as B2K. Their eponymous debut album broke out with the lead single "Uh Huh." After releasing three albums, a dance movie with an amazing soundtrack for "You Got Served", their cult-following turned into a massive fan base that remained dynamic to this day even after the group went their separate ways in 2004.

Fans who have relentlessly pushed for this reunion tour have not rested on their efforts. The hot pursuit for tickets goes on. The clock is ticking…no time to waste. Get your tickets now before it's too late.