Electro-R&B sensation The Weeknd comes to The Forum on Sunday 30th April 2017! Supporting the release of his latest album, Starboy, the Canadian singer, songwriter and producer will be hitting the road on his mammoth Starboy: Legend of the Fall 2017 World Tour! No doubt he'll be performing his trademark smooth grooves like "Can't Feel My Face" and "The Hills," as well as songs from his hotly anticipated new LP! 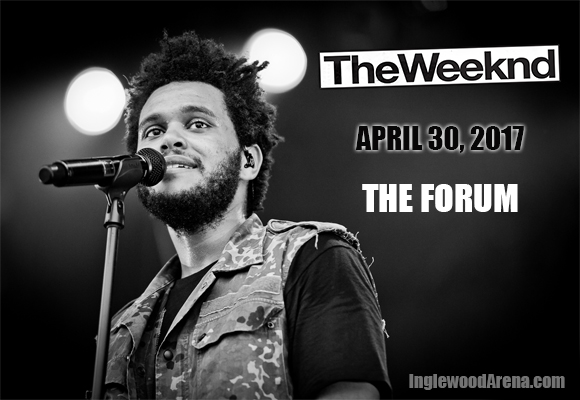 The Weeknd is the stage name of Canadian PBR&B singer, songwriter and record producer Abel Tesfaye. The Weeknd started as a project in 2010 and has seen Tesfaye work with a variety of different producers and artists. Rapper Drake helped draw attention to The Weeknd when he posted a blog featuring some songs that Tesfaye had put up on his Myspace page. This led to an on-stage collaboration with Drake and an appearance as a special guests at Drake's second Annual OVO Fest on July 31, 2011. By the end of 2011 The Weeknd had released a trilogy of mixtapes to critical acclaim, and the following summer saw Tesfaye tour several major cities around the world with his band, in addition to appearances at multiple festivals including Coachella. September 2012 saw The Weeknd sign with Republic Records in a joint venture with his own imprint label XO. When his debut album Kiss Land was released a year later, it debuted at number two on the US Billboard 200, selling 96,000 copies in just one week. Since then, The Weeknd has released a collaboration with Ariana Grande and has had songs featured on the soundtracks for The Hunger Games: Catching Fire and Fifty shades of Grey. 2015 saw the release of his second album, which featured guest appearances and production from Labrinth, Ed Sheeran, Kanye West and Lana Del Rey. His latest album, Starboy, features a collaboration of the same name with Daft Punk, and is slated for release on November 25th 2016.