Feeling stressed out? All you need is a great boost of energy to turn your 'blahs' into a blast! And that's what today's most in vogue electro-indie pop band is here for…TWENTY ØNE PILØTS will surely give a shot of energy to your veins with their andrenaline-pumping, show-stopping showmanship. Word spreads fast, so if you don't speed things up, tickets will quickly fly off the shelves. Go, get your tickets now! 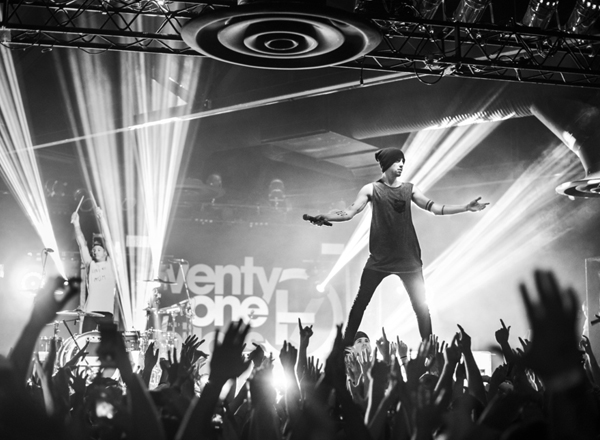 In 2009, a musical duo from Columbus, Ohio composed of Tyler Joseph and Josh Dun called themselves TWENTY ØNE PILØTS. Their relentless gigs, fan connections, and internet savvy started getting attention and began building up in 2010 through the release of two tracks on SoundCloud–an original called “Time to Say Goodbye” and a cover of “Jar of Hearts by Christina Perri. Things started to get on a roll when they were signed up to indie label Fueled by Ramen. From one album release to the next, Twenty One Pilots' career trajectory was pointed to the top, and is now soaring high with a collection of massive hit singles, namely, "Guns for Hands", "Lovely", "House of Gold", "Holding on to You", "Car Radio", "We Don't Believe What's on TV", "The Judge", "Tear in My Heart", "Stressed Out", "Ride", "Polarize", "Message Man", "Lane Boy", "Fairly Local", Doubt", and "Goner".