'When We All Fall Asleep, Where Do We Go? Well, we definitely live the dream and wake up 'happier than ever as Billie Eilish announces The Hometown Encore happening at The Kia Forum as the finale to her successful Happier Than Ever Tour. The encore is taking the stage on Tuesday, 13th of December 2022 as the perfect year-ender for her fans. The Grammy Award-winning singer-songwriter is set to wrap up the Happier Than Ever era as 2022's party comes to a close. With a new year right around the corner, big surprises are in store for Billie Eilish's fans across the world. Don't miss out on The Hometown Encore by booking your tickets now! 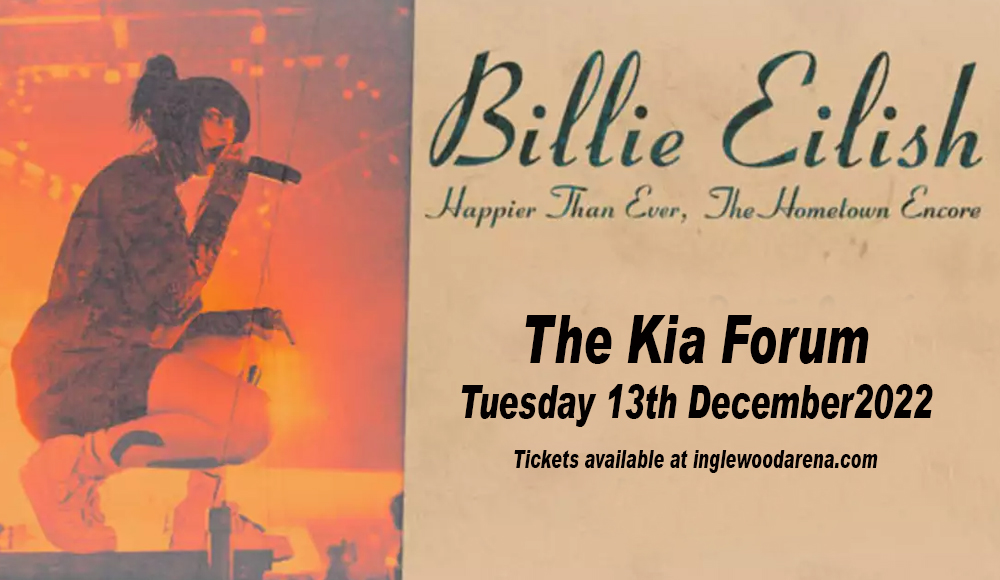 Following the mega-success of her Happier Than Ever, The World Tour in support of her second album, Billie Eilish is adding December 13th to her back-to-back performances at The Kia Forum for The Hometown Encore. As a last hurrah to her highly-successful Happier Than Ever era, the singer is set to wrap up 2022 with her biggest shows yet. You can expect her to perform "Happier Than Ever", "Your Power", and more crowd-favorite tracks off of the album, along with her biggest hits and more fan favorites.

In promotion for the special live stream of her O2 Arena show in London for the Happier Than Ever, The World Tour, Eilish shared with Zane Lowe of Apple Music "My life show is one of the most important parts of me as an artist… And the idea that there are people that know me as an artist and don’t know me live freaks me out. I kind of wish I was known mainly for my show."

Making history as the youngest artist to win all four general field categories at the Grammy Awards in the same year, specifically Best New Artist, Record of the Year, Song of the Year, and Album of the Year, Billie Eilish's global success is definitely one for the books. Causing a wave of 'ocean eyes across the pacific for her soft-spoken emotionally-sung lyrical tales and melodies, Eilish, with the help of her brother Finneas' production magic, introduced unique vocal delivery and melodic production to the mainstream stage.

It all began when the 13-year-old Billie began making songs with her brother, Finneas. "We recorded them and put them out on SoundCloud, just for fun," she shared. Her first hit "Ocean Eyes" was a track her brother gave to her when asked to write a song for choreography by her dance teacher. Management and a record deal soon after, everything just fell into place. Her debut EP "Don't Smile at Me" became a sleeper hit, rising to #14 on the Billboard 200. The EP featured her hit tracks "Ocean Eyes", "Bellyache", "Idontwannabeyouanymore", and "Copycat".

After the surprising success of her debut EP, Eilish followed it up with a highly-anticipated full-length studio album released in 2019. "When We All Fall Asleep, Where Do We Go?" produced a slew of global hits for the singer, bagging multi-platinum hit singles including "When the Party's Over", "Bury a Friend", "You Should See Me in a Crown", and "Bad Guy".

Two years later, she dropped her sophomore album "Happier Than Ever" featuring her singles "My Future", "Therefore I Am", "Your Power", "Lost Cause", "NDA", and the record's title track. Surprising the world with soaring belts at the latter part of her hit title track single, the album hit the top of the charts around the world.

After the success of her blockbuster record and world tour, she released an EP named "Guitar Songs" to everyone's surprise. The record includes the songs "TV" and "The 30th" to which she shared that "these songs are really current for me, and they’re songs that I want to have said right now". The songs were supposed to be in her upcoming third album but felt the need to share its message with the world as soon as possible.

With the Happier Than Ever era wrapping up, and hints of a new album coming up, don't miss out on Billie Eilish's last hurrah for 2022 at The Hometown Encore at The Kia Forum by booking your tickets now!