Multi-platinum-selling new guard pop queen Ariana Grande comes to The Forum on Friday 10th May 2019 on the Sweetner Tour! After a tough year, the "God is a Woman" singer is ready to hit the road for the first time since 2017’s “Dangerous Woman Tour” and bring fans her undeniably incredible stage show, which sees Grande busting phenomenal moves and pushing those amazing vocals to the max! Tickets available now! 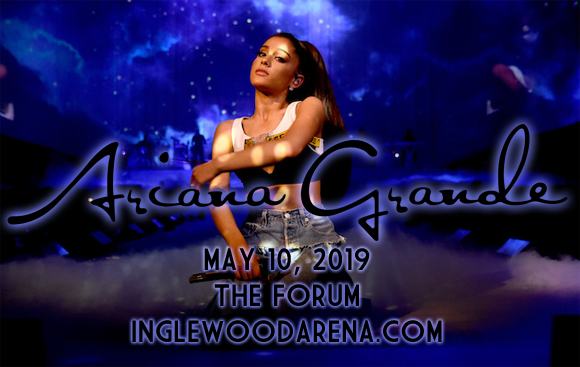 American singer, songwriter and actress Ariana Grande made her professional debut in 2008 on Broadway, in the musical 13. She went on to play the role of Cat Valentine in the Nickelodeon television series Victorious from 2010 – 2013 and her appearance on the 2011 soundtrack, Music From Victorious, led to a recording contract with Republic Records. She released her debut album, Yours Truly, in 2013, which debuted at number one on the Billboard 200 and launched the top ten hit "The Way". Since then, her music career has continued to grow, and in 2014, she had the most top ten singles of any artist. Grande is the first person in the history of the Billboard Hot 100 chart to have the lead singles from each of their first three albums debut within the top ten in the US. In August 2018, she released her fourth studio album, Sweetner, which debuted at number one on the Billboard 200 and launched the singles "No Tears Left to Cry", "The Light is Coming" and "God is a Woman".