The "rumors" have been confirmed to be true… Fleetwood Mac are coming live to The Forum on Tuesday 11th December 2018! Back with the additions of guitarists Mike Campbell (Tom Petty and the Heartbreakers) and Neil Finn (Split Enz, Crowded House) after the departure of Lindsey Buckingham earlier in the year, the iconic group will be performing a plethora of hits from their illustrious career! Tickets available now! 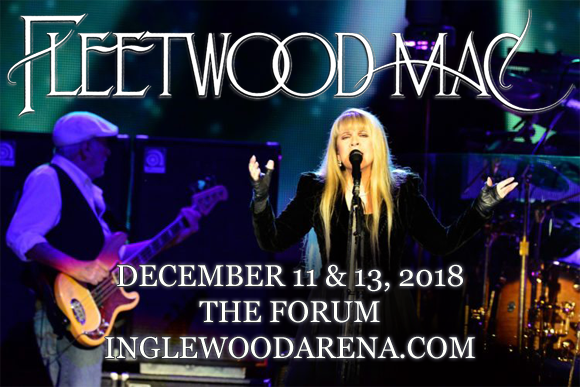 Formed in London, England in 1967, British-American rock band Fleetwood Mac are one of the world's best-selling bands of all time, having sold over 100 million records. Founded by guitarist Peter Green, drummer Mick Fleetwood and guitarist Jeremy Spencer , Fleetwood Mac began primarily as a blues-rock band, releasing their self-titled debut album in 1969 and scoring a UK number one with their 1968 hit single "Albatross". The band has evolved through several personnel changes over the years, with their most successful line-up consisting of Lindsey Buckingham (guitar, vocals), Stevie Nicks (vocals), Christine McVie (keyboards, vocals), John McVie (bass guitar) and Mick Fleetwood (drums), whose 1977 album Rumours has sold over 40 million copies worldwide, making it the eighth-highest-selling album to date. In 2018, Buckingham left the band and they are now joined by guitarists Mike Campbell, formerly of Tom Petty and the Heartbreakers, and Neil Finn, formerly of Split Enz and Crowded House.