MASSIVE news!! None other than the Columbian Queen of Latin pop SHAKIRA is going on a huge worldwide tour in 2018 in support of her brand new album “El Dorado”, released May 2017. The tour will take her to The Forum on Thursday 1st February 2018 – don’t miss your chance to see the incredible singer live! With her jaw-dropping choreography and full-on stage show, it’s going to be an experience you’ll never forget. 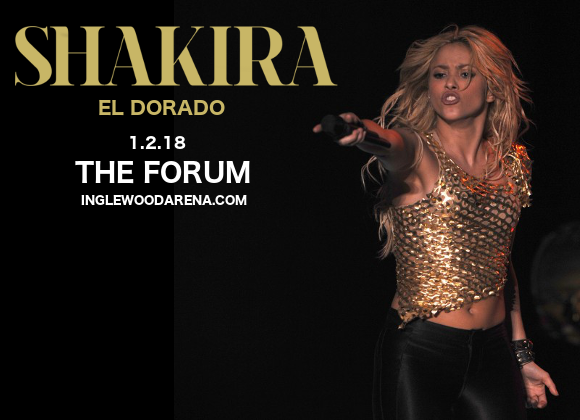 A household name around the world, few singers need an introduction less than the legendary Shakira! The winner of countless awards, including five MTVs Video Music Awards and two Grammy Awards, as well as a constant stream of smash hit albums, singles, and music videos Shakira has delighted audiences around the world for years with her mesmerising dancing style and uniquely rich singing voice.

“El Dorado,” is Shakira’s eleventh studio album. Released on 26 May 2017 by Sony Music Latin, the album is mainly sung in Spanish, with three songs sung in English, and is thematically centred around the singers relationship with her boyfriend, Gerard Piqué, who’s unwavering support helped her to overcome writers block after the birth of her second child.

"Thank you all so much for listening to my music in so many places around the world," the superstar enthuses in an interview; "I can't wait to be onstage again singing along with all of you, all of your favorites and mine. It's going to be fun! The road to El Dorado starts now!”

Grab your tickets TODAY while they last!!